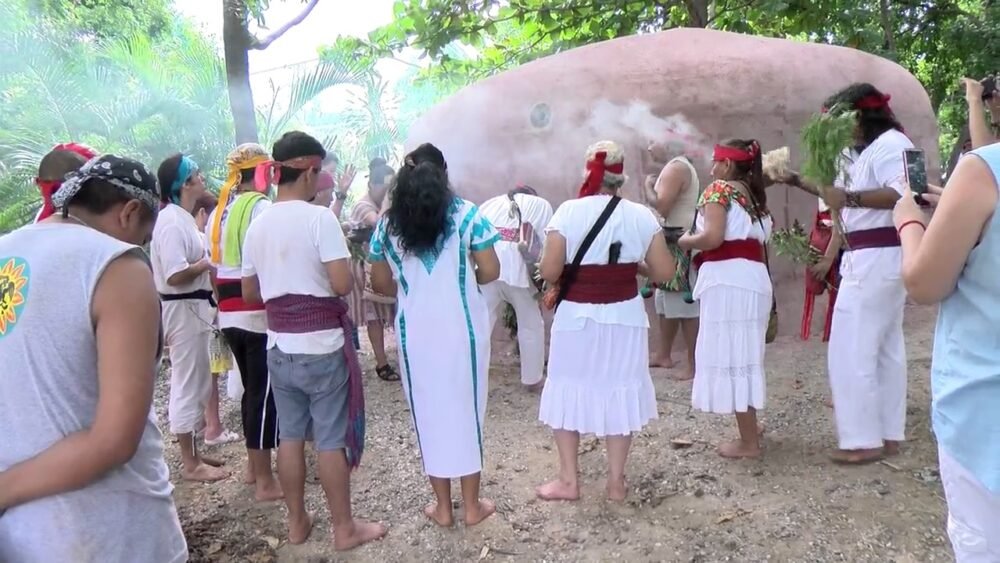 Temazcal is an ancient Mayan ceremony that could be described as being part sweat lodge and part sacred ritual. It is done for the purpose of cleansing the body, mind, spirit, and soul to bring about healing, good health, focus, and a number of other positive effects. Because it involves steam and heat, it 1) flushes out toxins in the body; 2) cleanses the pores to enhances skin health, and 3) aids blood flow that increases oxygen and lowers blood pressure. At a mental and spiritual level, the experience requires the mind to focus (much like in deep meditation) to help the self let go and disassociate with the physical world to allow a stronger connection to the spirit. A connection that brings enlightenment, healing, and centeredness through practice and discipline.

Ceremonies may vary from group to group, but generally speaking, there is always a residing Shaman who starts the ceremony by smudging everyone with white sage.

The Shaman then leads everyone in offering intentions to the four cardinal directions of the Earth. When the intention are set, the Shaman leads the group in offering incense to a fire that is used to heat rocks. This process prepares an individual to go into the dome that is considered to be a sacred space for the ceremony.

When entering the dome, the men followed the Shaman first and then the woman. Each person giving their respects and offering a short prayer before entering the sacred space. There is usually one person who will enter last, and he will be the one designated to pass the heated rocks into the dome. These rocks will be placed carefully into a pit located in the middle of the structure. Initially, a few stones will be placed in the pit, but as the ceremony moves forward, all the stones were placed into the center. Once the stones are positioned, and the last person enters the dome tent, the Shaman will say a prayer and bless each rock with Copal Resin from the Copal Tree. This releases a sweet, yet spicy aroma that permeates the space. Afterwards sage, mint, and other aromatic herbs are placed on the hot stones as an offering of good intention and well-being.

At about this time, the heat in the dome tent begins to rise considerably, but once water is added to the hot stone pit, the humidity becomes intense and the air begins to feel really hot. At its peak, the heat can get really intense and required a slow breathing technique that allows the inhaled air to cool before entering the lungs. The act of focusing on the breath, while listening a combination of prayers offered by the shaman,

drum beats, and singing inside the dome, makes the experience go by quite fast as one begins to slip into a light meditation. What feels like 5 minutes will actually be about 15 minutes that passes. This is just the first round. There are three more rounds to complete. The fourth round will be the most intense, but will also also seem to end much quicker as the mind gets deeper into the experience.

When the ceremony ends, everyone exits the hut in the same way they entered it; men first then woman, giving thanks and saying a little prayer at the door. After re-acclimating to the ambient temperature outside, everyone will have the opportunity to shower and change into dry clothing. Coming out of the experience there is a sense of exhilaration and accomplishment.