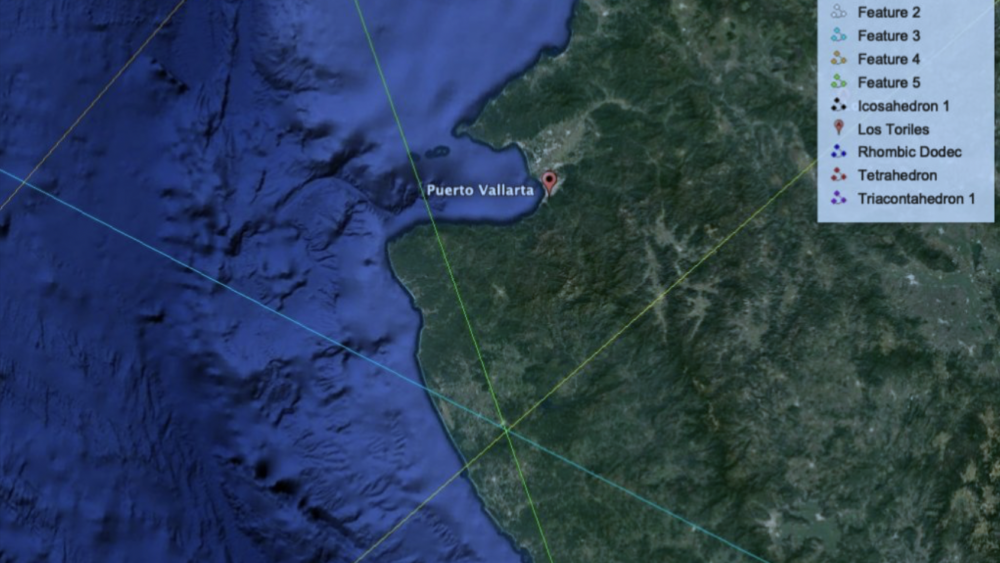 A VORTEX IN PUERTO VALLARTA?

Here is an alternate, and quite frankly, more accurate depiction of the Ley Lines in Puerto Vallarta that is based on scientific and imperial evidence. That said, it doesn’t mean that Bart’s article should be negated, only that evidence has not been found to support his theory.

MAP OF THE EARTH’S LEY LINES

Having done my research, I was able to find an overlay that you can add to Google Earth that maps out all the existing Ley Lines throughout the world and their corresponding vortices. This overlay was created by a group of researchers who carefully studied the alignment of spiritual locations and ancient ruins, anthropological and scientific data, along with magnetic anomalies around the world.

Google Earth shows a major vortices located just 3km from Tomatlan, Jalisco Mexico. The Colonia sits in the path of a Ley Line that intersects other Ley Lines to create that vortex. Puerto Vallarta sits about 80km from that vortex. Because this is considered a major vortex, Puerto Vallarta and surrounding areas are impacted by its energy and more so as you get closer to its point of origin.

SO WHAT ARE LEY LINES?

Ley Lines create an energetic grid that criss cross the globe connecting energy vortices to each other. Now this may sound wild and out there, but in fact, scientists have discovered many points around the Earth that have a stronger electro-magnetic pull or have magnetic anomalies. These points are considered important when mapping out Ley Lines. It is also believed that the ancients knew about these Ley Lines and subsequently built megalithic, mystical and spiritual structures on them such as the Pyramids of Giza, Angkor Wat, Stonehenge, and other well known and not so well known structures throughout the world. When mapped out on the globe, these structures align with almost exact precision along these lines.

The energetic affects of Ley Lines and vortices can be felt for many kilometers/miles around. They give off a high frequency vibration that can be felt by animals, people, plants and affect land around it. When channeled appropriately, the energy of a vortex can help with anything from fertility, agriculture, emotional and mental stability, memory, heightened perception and expanded consciousness. It is also known to amplify the energy of and individual’s state of being. A common thread amongst those who spend time in a location affected by Ley Lines or vortices is an unexplained sense of connection to the location and/or a strong feeling of contentment. This is why many who arrive to Puerto Vallarta end up extending their stay and often moving here, but can’t exactly determine why they are drawn here. Hence you might often hear the phrase “the magic of Puerto Vallarta” spoken quite often by visitors and locals alike.